The Wailing Wampus Werewolf is a character in Open Season: Scared Silly. He is a werewolf who was being hunted by Boog, Elliot, and Mr. Weenie, as well as Shaw, Ed, and Edna.

Not much is known about the werewolf's past.

The Wailing Wampus Werewolf is a large grey werewolf. 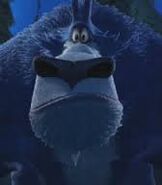 Add a photo to this gallery

Retrieved from "https://openseason.fandom.com/wiki/Wailing_Wampus_Werewolf?oldid=17969"
Community content is available under CC-BY-SA unless otherwise noted.